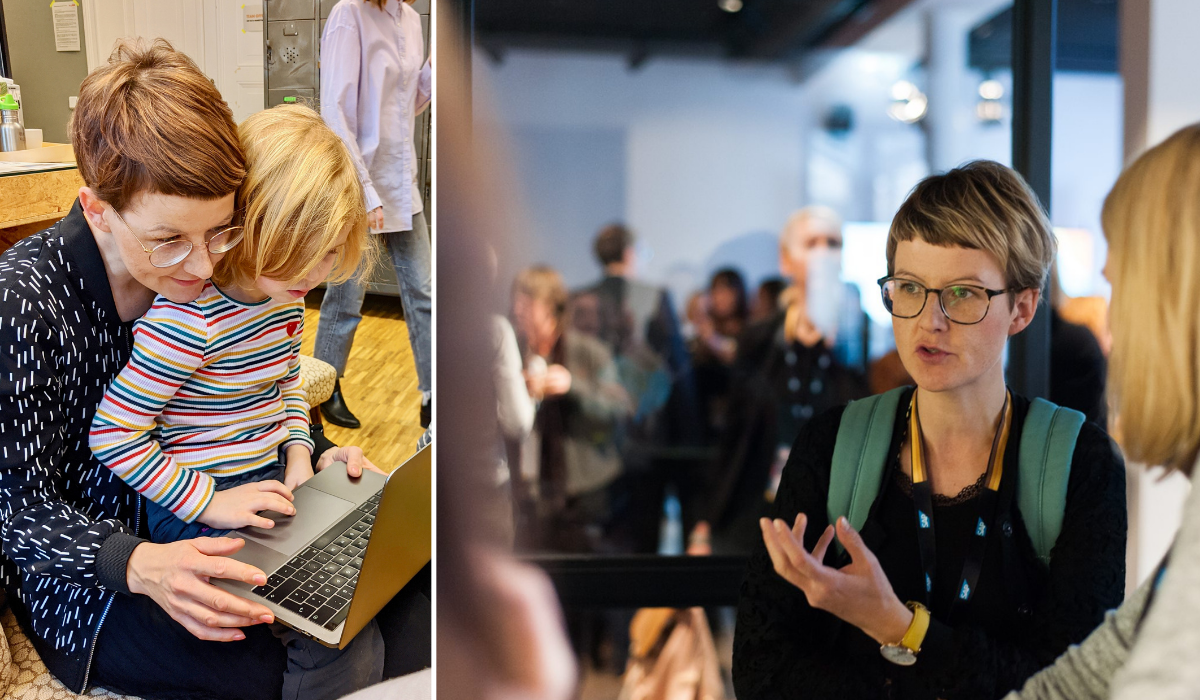 Talking about children in a business network? – No way! (Or do you?)

We are all not free of stereotypical thinking patterns. I became aware of this again just recently. I had prepared a social media post to highlight our coworking offer in combination with flexible childcare for all home office-strapped parents. The post was targeted to our extended community, i.e. founder networks, various expat communities and Facebook groups where many working parents hang out.

The posts in the expat and family groups went out quickly – but I stalled when it came to the business networks. I felt an inner barrier: Was it appropriate to publish a post that primarily addressed our childcare in a business network? This group was about work, not children. Would the post annoy the members of the group? On the other hand, why should it – after all, it contained an offer that was probably even relevant to many. We had hosted a few meetups of this network in the past and knew some of the members personally. And yet it made me feel uncomfortable to publish a post that showed our kids’ room with colorful toys, with kids and caregivers in action, on a network for “business women.” In other words, I found myself opening two strictly separate drawers: family on the left, business on the right – and please don’t mix them up.

Where did this image in my head come from? Haven’t we been talking, writing, founding against it for years? Why is it so difficult to break out of these thought patterns – even among those who have long since known better and live differently?

I think one reason is the permanent evaluation of parenthood. When you have children, suddenly everyone has an opinion about you and what you do (and don’t do). Even in public discourse, the attributions given to parents and especially mothers are, let’s say, not very ingenious. While women are said to have almost superhuman powers when a child is born, these powers are quickly forgotten when the new mother wants to return to her management position or collect a seven-figure investment for her start-up idea. Musician Judith Holofernes described her encounter with the “parenting scale” in an interview with the newspaper FAZ: “In the beginning, I used to mention my motherhood very openly because I thought it was valuable to talk about the reality of (…) being a parent. But soon I let that go, because the mommy narrative became more and more blatant. It’s like one of those female corporate bosses who, after becoming a mother, is constantly being told how ‘motherly” she is in organizing her flip charts.” Then again, almost superhuman is indeed the feat that parents must complete in order to simply remain themselves between categories of “real career woman” and “mommy blogger” (the latter seemingly having lost all professional ambition) and to go their own way with confidence in their own abilities.

Work Space for Parents – like a Space Mission, only more blatant.

When my co-founder Silvia and I launched the first coworking space with flexible childcare in Berlin in 2016, we found ourselves on all sorts of points on the parent rating scale, depending on who we talked to. A bit of split personality can’t hurt even today, in 2020, when you’re building a business as a parent. One day we spoke at a high-profile international conference on ParentPreneurship and Work Spaces of the future, and the next day we were “the founders of this mommy place” in another conversation. The one that customers would call to make sure that the event they had booked in our workshop room would not be disturbed by children jumping around. True story. It is these little remarks, which we counter casually at the moment of their utterance, but which obviously shape our thoughts and actions. They slow us down or cause us to constantly explain and justify ourselves.

We are also often surprised by the admiration that many people have for our concept: a workspace with children? Under one roof? – Wow! Sometimes we feel as if we had launched the first manned mission to Mars, rather than simply creating spaces in which we bring together two essential human needs as a matter of course and without any superhuman effort on the part of anyone involved: the need for family and the need for professional fulfillment.

‘Dad in me can join me at any time’

This all sounds terribly negative. But of course there are bright spots. And these are becoming noticeably more frequent. There are encounters like the one with the suit-wearing CEO (sorry, cliché, but that’s how it happened), who disappeared into one of our meeting rooms in the morning, rather taciturnly, and during the second coffee break was sitting on the couch in our community café, wearing socks and no jacket, talking about his children. Not by accident, but because he felt he could in that environment. Or the talk with a father who had been a member of our community for a year, and who sat in front of us on his last day and said, “You know what I like about this place? That I can devote myself fully to my professional development here, with the good feeling that the dad in me can join me at any time.” Or the many “returnees” who come to us with their second and third children and say: “Yes, I’m back – with baby and business, as usual.

Thinking about parenthood and business as a unity

That’s exactly the kind of change we want in society: away from the pigeonholes – work here, family there – and toward an appreciation of a life that consists of very different and not always straightforward phases, in which children are sometimes more and sometimes less present, but always have a crucial influence on their parents’ (working) lives and decisions. And that sometimes has far-reaching consequences. Because these decisions also affect the question of how parents really want to live and work and what ventures they want to devote their time and energy to. It is no coincidence that many people start thinking about founding their own company during their parental leave. Nor is the fact that parent founders are often social entrepreneurs. Parenthood and entrepreneurship are inseparable. If we want people to be able to develop and shape their potential in all phases of life, we have to break down the thought patterns described at the beginning and consistently build structures that connect the most diverse facets of life instead of separating them. Work spaces and startup hubs that also take parents and children into account are an important building block here.